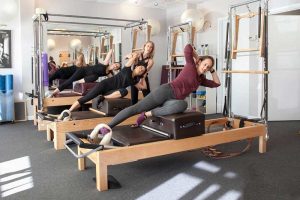 Joseph Pilates presents his method as the art of controlled movements, which should look and feel like a workout (not a therapy) when properly manifested.
If practiced with consistency, Pilates improves flexibility, builds strength and develops control and endurance in the entire body. It puts emphasis on alignment, breathing,
developing a strong core, and improving coordination and balance. The core, consisting of the muscles of the abdomen, low back, and hips, is often called the “powerhouse”
and is thought to be the key to a person’s stability. Pilates’ system allows for different exercises to be modified in range of difficulty from beginner to advanced or to any other level,
and also in terms of the instructor and practitioner’s specific goals and/or limitations. Intensity can be increased over time as the body adapts itself to the exercises

Joseph Pilates accompanied his method with a variety of equipment, for which he used the term “apparatus”. Each apparatus was designed to help accelerate the process of stretching, strengthening, body alignment and increased core strength started by the mat work. The best-known and most popular apparatus today, the Reformer, was originally called the Universal Reformer, aptly named for “universally reforming the body”. Eventually, Pilates designed other apparatus, including the Cadillac, Wunda Chair, High “Electric” Chair, Spine Corrector, Ladder Barrel and Pedi-Pole