Different foods affect the body in different ways and sugar is uniquely fattening.

Glucose is absolutely vital to life and is an integral part of our metabolism. Our bodies produce it and we have a constant reservoir of it in the bloodstream.

Every cell in the body can use glucose for energy. If we don’t get glucose from the diet, our bodies produce what we need out of proteins and fats.

Fructose, however, is very different. This molecule is not a natural part of metabolism and humans do not produce it.

In fact, very few cells in the body can make use of sugar except liver cells.

When we eat a lot of sugar, most of the fructose gets metabolized by the liver. There it gets turned into fat, which is then secreted into the blood. 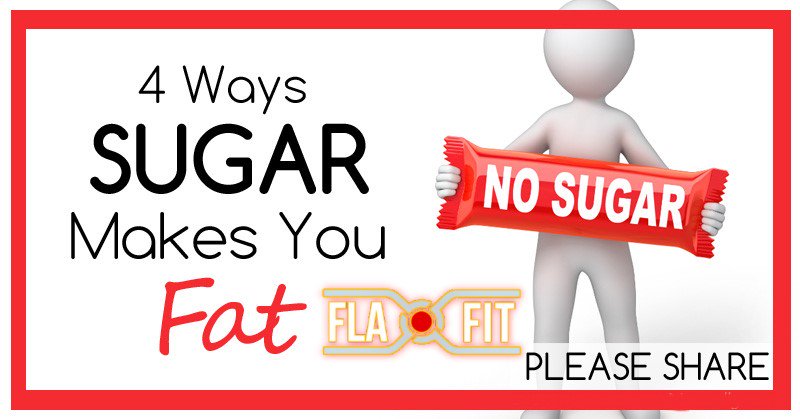 Have you ever heard of the hormone insulin?

It is one of the key hormones that regulate human metabolism and energy use.

Insulin is secreted by the pancreas, then travels in the blood to peripheral cells like muscle cells.

Insulin sends a signal to these cells that they should put transporters for glucose onto their surface, thereby allowing glucose to get into the cells where it can be used.

When we eat a high carb meal, glucose levels go up. Excess glucose is toxic so insulin rapidly goes up in order to get the glucose out of the bloodstream and into the cells.

If we didn’t have insulin or it wasn’t functioning correctly, blood glucose would reach toxic levels.

In healthy people, this mechanism works very well and enables us to eat meals that are high in carbohydrates without our blood glucose levels becoming too high.

However, this mechanism tends to break. Cells become resistant to the effects of insulin, which makes the pancreas have to secrete even more to drive the glucose into the cells.

Basically, when you become insulin resistant, you will have more insulin in your blood all the time (until the entire thing breaks and leads to type II diabetes, which can happen eventually).

But insulin also has other functions. One of them is sending signals to our fat cells. Insulin tells the fat cells to pick up fat from the bloodstream, store it and to avoid burning the fat that they already carry.

When insulin levels are chronically elevated, much of the energy in our bloodstream gets selectively deposited in the fat cells and stored.

Excess fructose consumption is a known cause of insulin resistance and elevated insulin levels in the blood (1, 2).

When this happens, the body has a hard time accessing the stored fat and the brain starts to think that it is hungry. Then we eat more.

Mechanism #1 of sugar-induced fat gain: Eating a lot of sugar chronically raises insulin levels in the blood, which selectively deposits energy from foods into fat cells.

Woman Stuffing Herself With Cake

Fructose also causes weight gain by its effects on a hormone called leptin.

Leptin is secreted by fat cells. The bigger the fat cells get, the more leptin they secrete. This is the signal your brain uses to determine how much fat it has stored for a rainy day.

When we eat food, some of it gets stored in the fat cells. This makes the fat cells get bigger and secrete more leptin.

When the brain senses the increased leptin, it “sees” that we have enough fat stored and that we don’t need to eat.

This is the elegant mechanism designed by nature to make us stop being hungry and eat less when there is plenty of fat in the our fat cells, which is supposed to prevent us from becoming obese.

This is how it’s supposed to work, but if the brain becomes resistant to leptin (doesn’t “see” the leptin in the blood) then this regulatory process won’t work.

If the brain doesn’t see the leptin, it won’t know that the fat cells are full and there won’t be any signal to tell the brain that it needs to stop eating.

3. Fructose Does Not Induce Satiety in The Same Way as Glucose

The way the body and brain regulate food intake is extremely complex and involves multiple hormones and neural circuits.

There is a region in the brain called the hypothalamus, where all of these signals are interpreted.

This is where leptin (discussed above) functions in the brain, along with various neurons and other hormones.

A relatively new study published in 2013 examined the effects of fructose vs. glucose on satiety and food intake (5).

It turned out that the glucose drink lowered blood flow and activity in the hypothalamus (where food intake is controlled) while the fructose drink did not.

The glucose drinkers felt less hungry and more full compared to the fructose drinkers, who didn’t feel satisfied at all and were still somewhat hungry.

This implies that the fructose-sweetened drink, despite having the same calories as the glucose drink, did not increase satiety as much.

Another important hormone is called ghrelin, the “hunger” hormone. The more ghrelin, the more hungry we feel.

Another study showed that fructose did not reduce blood levels of ghrelin nearly as much as glucose did.

These studies suggest that fructose does not make you feel full after a meal in the same way as glucose, even with the exact same number of calories.

Mechanism #3: Fructose does not make you feel full after a meal in the same way as glucose, which leads to an increase in overall calorie intake.

This is how leptin resistance makes us fat. The brain thinks that the body is starving and makes us eat more and burn less.

Trying to exert “willpower” over the powerful leptin-driven starvation signal is next to impossible. This is why most people can’t just simply “eat less, move more” and live happily ever after.

In order to be able to eat less, we have to get rid of the leptin resistance, so that our brain “sees” all the fat that we have stored.

A high fructose diet can cause leptin resistance. One of the mechanisms is that fructose raises levels of triglycerides in the blood, which blocks the transport of leptin from the blood and into the brain (3, 4).

This is how excess sugar throws body fat regulation off, making the brain think that it needs to keep eating.

Mechanism #2: Fructose makes the brain leptin resistant, which means that the brain doesn’t “see” all the stored fat in the body and thinks that it is starving. This causes a powerful leptin-induced biochemical drive to keep eating even when we don’t need to.

4. Sugar Can Make Some People Addicted

Sugar causes opiate and dopamine activity in the reward centers of the brain, just like drugs of abuse like cocaine (6).

In a large review paper published in 2008 in the journal of Neuroscience and Biobehavioural Reviews, researchers examined the evidence for the addictive potential of sugar (7).

These studies were done in rats, which are good representatives of humans because they become addicted to abusive drugs in the same way as we do.

A quote from the study:

“The reviewed evidence supports the theory that, in some circumstances, intermittent access to sugar can lead to behavior and neurochemical changes that resemble the effects of a substance of abuse.”
The evidence is very strong for sugar being downright addictive. It makes perfect sense given that it affects the same neural pathways as drugs of abuse.

Eating sugar gives us “pleasure” and releases opiates and dopamine in the reward system of the brain, specifically in an area called the Nucleus Accumbens (8). These are the same areas stimulated by drugs of abuse like nicotine and cocaine.

For certain individuals with a certain predisposition, this can lead to full blown addiction.

Individuals that get strong cravings for sugar and are unable to quit or reduce their consumption despite negative physical consequences (such as weight gain) are sugar addicts.

Mechanism #4: Sugar, due to its powerful effects on the reward system in the brain, leads to classic signs of addiction comparable to drugs of abuse. This activates powerful reward-seeking behavior that can drive overeating.

The Perfect Recipe For Fat Gain

Okay, so let’s take a step back and review what we have covered about fructose and fat gain.

Fructose causes insulin resistance and raises insulin levels in the body, which increases the deposition of fat in the fat cells.
Fructose causes resistance to a hormone called leptin, which makes the brain not “see” that the fat cells are full of fat. This leads to increased food intake and decreased fat burning.
Fructose does not make you feel full after meals. It does not lower levels of the hunger hormone ghrelin and it doesn’t reduce blood flow in the centers of the brain that control appetite. This increases overall food intake.
Sugar, with its powerful effect on the reward system, causes addiction in certain individuals. This activates powerful reward-seeking behavior that also increases food intake.
So, excess fructose consumption dysregulates short-term energy balance on a meal-to-meal basis and throws long-term energy balance out of whack.

The more sugar you eat and the longer this process is allowed to continue, the more powerful it becomes. Insulin and leptin resistance increase over time and the reward-seeking behavior becomes stronger.

This way, sugar sets up an extremely powerful biochemical drive to make you eat more, burn less and get fat. Trying to exert willpower over this powerful drive can be next to impossible.

I’d like to point out that this does not apply to whole fruits, which are real foods with fiber and a low energy density. Fruits are a relatively minor source of fructose in the diet.